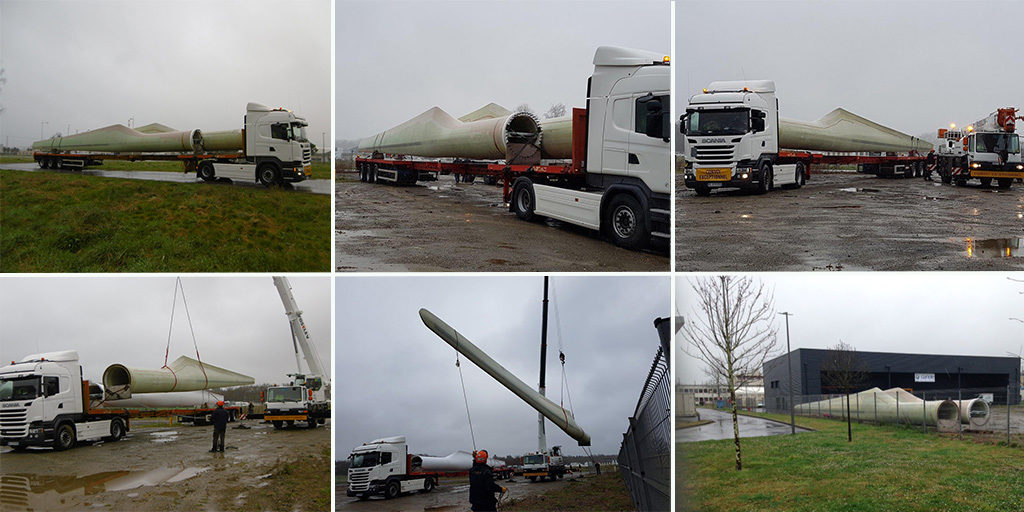 At the end of March, two wind blades of 25meters each have arrived at CANOE technological center in LACQ. They have been manufactured in Elium® resin during the EFFIWIND project in which ARKEMA and CANOE are partners. It is a world first for wind energy.

Two wind blades of 25 meters each manufactured by Plastinov/Multiplast in Marmande (47) were delivered at CANOE Lacq technological center at the end of March by special convoy. It is a first worldwide. Indeed, those two wind blades are the first two of such a size produced in Elium® thermoplastic resin. They are the result of a tight collaboration between Arkema and CANOE adapting the infusion process, in which Plastinov/Multiplast is specialized, to this new resin.

After the production of a first demonstrator of 9 meters in 2017, an important step has been taken. This provides evidence the industrialization of wind blades of great dimension is possible without the use of heating molds. Elium resin offers thermoforming, welding and recyclability properties. It can indeed be depolymerized at high temperature, to be purified as the initial monomer, to be used as Elium® resin again. An innovative answer for the fate of wind blades once disassembled.

This project is part of the EFFIWIND program, in which Arkema is the project leader and CANOE is one of the main partner. EFFIWIND project intends to replace old blades by longest and most efficient ones.  From a technological point of view, this project brings innovative materials solutions for wind energy: recyclable thermoplastic resin, carbon pultruded profiles for weight gain, assembly made with acrylic Bostik adhesive, increase of mechanical performances and facilities for repairing damages. EFFIWIND is a project co-founded by the ADEME and the Nouvelle Aquitaine regional council, which has begun in March 2014 and should end in 2020 after the installation of three blades on Plougras site (22).

For now, one of the 2 blades delivered to CANOE Lacq should soon go to Germany to be tested for its certification. The other one will stay at Lacq and will be part of a show room named “chemistry, materials and energetic transition” set up on CANOE site.